On the Use and Abuse of Teleology for Life: Intentionality, Naturalism, and Meaning Rationalism in Husserl and Millikan

Both Millikan’s brand of naturalistic analytic philosophy and Husserlian phenomenology have held on to teleological notions, despite their being out of favor in mainstream Western philosophy for most of the twentieth century. Both traditions have recognized the need for teleology in order to adequately account for intentionality, the need to adequately account for intentionality in order to adequately account for meaning, and the need for an adequate theory of meaning in order to precisely and consistently describe the world and life. The stark differences between their accounts of these fundamental concepts stem from radically different conceptions of the world, the natural and life. I argue that Millikan’s teleosemantic approach relies on a teleology of determination by means of the lawfulness of nature that leaves no room for the freedom of self-determination, for reason, or for experience—for the reality of lived human life. In contrast to Millikan’s account, Husserl’s transcendental phenomenology situates teleology as a function of reason and first-personal experience, part of an extended account of intentionality and meaning according to which the full range of our making sense of the world is conceived as a rational activity that is itself a part of that world, and not an unnatural activity to be separated from it. While Husserl’s account of these issues is indeed symptomatic of what Millikan calls “meaning rationalism,” I argue that it is immune to the sorts of problems she claims will plague any such account, since these problems arise only against the background of a set of presuppositions about intentionality (representationalism, the “mythiness” of all givens) that Husserl does not share. Husserl’s position can itself be understood to be within the bounds of a suitably liberal conception of naturalism, and interpreting him in this way it has the added benefit—contra Millikan—of not divorcing teleology from reason, the latter construed as our first-personal striving to make sense of the world as we experience it—of life. 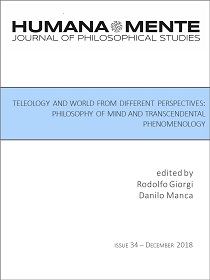 Published
2018-12-22
How to Cite
Rump, J. (2018). On the Use and Abuse of Teleology for Life: Intentionality, Naturalism, and Meaning Rationalism in Husserl and Millikan. HUMANA.MENTE Journal of Philosophical Studies, 11(34), 41-75. Retrieved from https://www.humanamente.eu/index.php/HM/article/view/213
Download Citation
Issue
Vol 11 No 34 (2018): Teleology and World from Different Perspectives: Philosophy of Mind and Transcendental Phenomenology
Section
Articles