Human Uniqueness, Bodily Mimesis and the Evolution of Language

I argue that an evolutionary adaptation for bodily mimesis, the volitional use of the body as a representational devise, is the “small difference” that gave rise to unique and yet pre-linguistic features of humanity such as (over)imitation, pedagogy, intentional communication and the possibility of a cumulative, representational culture. Furthermore, it is this that made the evolution of language possible. In support for the thesis that speech evolved atop bodily mimesis and a transitional multimodal protolanguage, I review evidence for the extensive presence of sound-symbolism in modern languages, for its psychological reality in adults, and for its contribution to language acquisition in children. On a meta-level, the argument is that dividing human cognitive-semiotic evolution into a sequence of stages is crucial for resolving classical dichotomies concerning human nature and language, which are both natural and cultural, both continuous with and discontinuous from those of (other) animals. 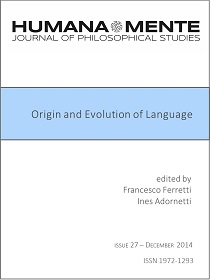