Flesh and Matter: Merleau-Ponty’s Late Ontology as a Materialist Philosophy

The ontology developed by Merleau-Ponty in the final stage of his work is centered on the concept of flesh, giving this notion its most general scope by complementing the idea of “flesh of the body” with that of a “flesh of the world.” This paper seeks to evaluate the possibility of reading this philosophy of the flesh as a materialist ontology. For this purpose, the possibility is considered of interpreting the concept of flesh as a new figure of matter, despite Merleau-Ponty’s claims that seem to preclude this interpretation. In concluding, the paper briefly discusses the potential contribution of this interpretation to approaching certain conceptual problems in contemporary science. It is argued that this approach can help to promote a more productive interchange between Merleau-Ponty’s fundamental thought and the philosophy of science. 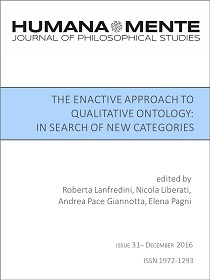