What does It Mean to Harm a Person?

The central task of my reflections is to deal with the question what harming a person could mean. In the first part of the reflections, I will be critically concerned with current ways of dealing with the concept of human dignity, and why it is no longer plausible to uphold these regulations, whereby I will particularly focus on the legal dimension. It will come out that the person-object-dichotomy cannot simply be upheld in its traditional manner. Given the plausibility of these reflections, the legal implication that it ought to be legally prohibited to treat another person merely as a means becomes implausible, too, as it rests on the aforementioned distinction between persons and objects. As an alternative, it will be suggested that legally we ought to separate ontological insights clearly from normative ones. In the following part, I will focus on the moral status of personhood, and develop some philosophical reflections which could be upheld on the basis of a posthuman paradigm-shift. Thereby, I will develop a gradual concept of personhood which implies several levels of personhood depending on the corresponding capacity of suffering, which needs to be established empirically. Once, the direction of an alternative concept of personhood becomes clearer, which implies that some animals become person and which provides some reasons for holding that some sufficiently developed embodied AIs could also deserve personhood, the question can be reflected upon further what it could mean to harm a person. The issue of harming, however, is so complex that I merely plan to raise some questions which need to be confronted when clarifying the concept of harming. I do not attempt to propose a definite concept of harming, but stress that the concept is closely related to cultural circumstances, so that there is a permanent need to engage with the concept, redefine it, and adapt it to the current cultural situation. Not proposing a clear concept of harm is not a shortcoming, but rather a necessity. 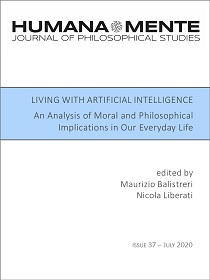 Published
2020-07-17
How to Cite
Sorgner, S. (2020). What does It Mean to Harm a Person?. HUMANA.MENTE Journal of Philosophical Studies, 13(37), 207-232. Retrieved from https://www.humanamente.eu/index.php/HM/article/view/322
Download Citation
Issue
Vol 13 No 37 (2020): Living with Artificial Intelligence. An Analysis of Moral and Philosophical Implications in our Everyday Life
Section
Articles