A Properly Embodied Self within a Naturalistic, Bottom-up and Systemic-Relational Framework

In this article a neo-Jamesian approach to the self is developed within a naturalistic, bottom-up, and systemic-relational framework. In this approach, consciousness of the body as one’s own body is a necessary precondition of self-consciousness as psychological self-awareness, and hence of a socially and historically situated narrative self. Thus we take on board the criticism of those accounts of the narrative self that pay little attention to embodiment, or go to the extreme of stating that the narrative self is abstract and hence not embodied. But at the same time, we reject the idea that the embodiment of the narrative self is provided by a pre-reflective self-consciousness. By contrast, we view self-consciousness as a construction all the way down, which develops from automatic and pre-reflective processing of representations of objects (object-consciousness), through awareness and then self-awareness of the body, up to introspective self-awareness and then narrative identity. This form of constructivism is a naturalistic reinterpretation of the Hegelian idea that selfhood is socially constructed and self-experience intersubjectively mediated. However, it enables to move away from that blend of narrativism and epiphenomenism that characterizes some strands of the socio-constructivist approach to the narrative self. The storied Me that the selfing process makes is not “empty chatter”, but rather a causally efficacious layer of personality viewed as a self-unifying system. 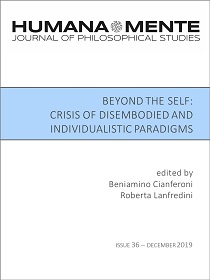 Published
2019-12-27
How to Cite
Marraffa, M., & Vistarini, T. (2019). A Properly Embodied Self within a Naturalistic, Bottom-up and Systemic-Relational Framework. HUMANA.MENTE Journal of Philosophical Studies, 12(36), 1-41. Retrieved from https://www.humanamente.eu/index.php/HM/article/view/298
Download Citation
Issue
Vol 12 No 36 (2019): Beyond the Self: Crisis of Disembodied and Individualistic Paradigms
Section
Articles