The Unity of the Manifest and Scientific Image by Self-Representation

Sellars (1963) distinguished in Empiricism and Philosophy of Mind between ordinary discourse, which expressed his “manifest image”, and scientific discourse, which articulated his “scientific image” of man-in-the-world in a way that is both central and problematic to the rest of his philosophy. Our contention is that the problematic feature of the distinction results from Sellars theory of inner episodes as theoretical entities. On the other hand, as Sellars attempted to account for our noninferential knowledge of such states, particularly in correspondence with Castañeda, discussed by Lehrer and Stern (2000), he is lead to account of representation of such states that incorporates the states into what Lehrer has called exemplar representation (2004, 2011a) and Ismael reflexive self-description (2007). What is common to the three accounts, with some differences, is that such states may be function reflexively in selfrepresentation. Our argument is that the elaboration of this account, suggested in Sellars, shows how the discourse of the manifest image can be transformed into the discourse of the scientific image as self-representations of scientific entities. 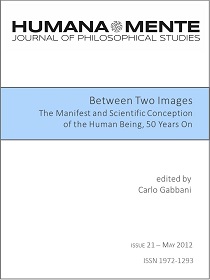 Published
2012-05-02
How to Cite
Lehrer, K. (2012). The Unity of the Manifest and Scientific Image by Self-Representation. HUMANA.MENTE Journal of Philosophical Studies, 5(21), 69-82. Retrieved from https://www.humanamente.eu/index.php/HM/article/view/183
Download Citation
Issue
Vol 5 No 21 (2012): Between Two Images. The Manifest and Scientific Conception of the Human Being, 50 Years On
Section
Articles