On What Is Not There. Quine, Meinong, and the Indispensability Argument

Using the theory of definite descriptions, Russell  and, following him, Quine masterfully challenged Meinong’s Theory of Objects (TO). In this paper, firstly I try to show that although the Russell-Quine’s interpretation of TO has been taken seriously even by many notable Neo-Meinongians and first-rate scholars, yet it is not the ultimately convincing reading of the Theory, at least not when we boil down the theory to Meinong’s primary motives and his essential arguments. Moreover, I show that a form of the indispensability argument is the backbone of Meinong’s theory. The argument is surprisingly akin to what Quine proposed for his realism with regard to the existence of mathematical entities. Consequently, I argue that mathematics plays an important role in Meinong’s argument and hence his overall theory. I believe that in this way the debate between Meinongian and Quinean can be directed to more compromising and fruitful grounds. 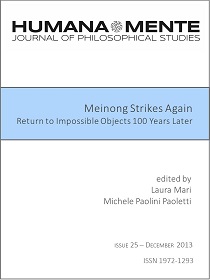 Published
2013-12-02
How to Cite
Beni, M. (2013). On What Is Not There. Quine, Meinong, and the Indispensability Argument. HUMANA.MENTE Journal of Philosophical Studies, 6(25), 77-94. Retrieved from https://www.humanamente.eu/index.php/HM/article/view/135
Download Citation
Issue
Vol 6 No 25 (2013): Meinong Strikes Again. Return to Impossible Objects 100 Years Later
Section
Articles